The interface shows a search box at the top left with Coptic works below, and some example queries on the right. All queries in this tutorial are linked to searches in the small Coptic Treebank, but you can change this in the bottom left list. 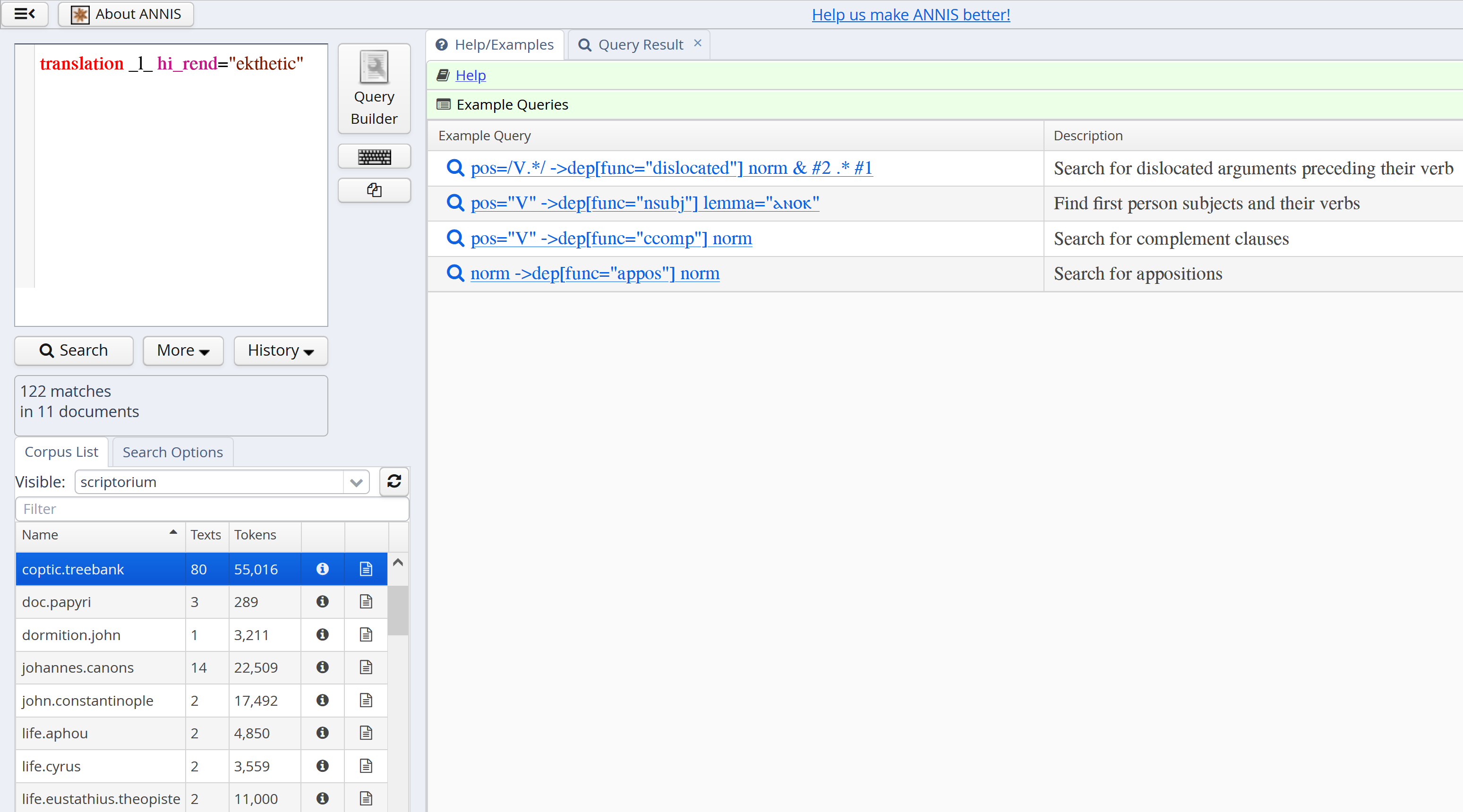 Where are the words in Coptic?

Words in Coptic can be complex, and the fact that manuscripts use various spellings for words complicates things further. Some terminology can help:

How to search for norms, morphs and groups

You can search for norm units, groups and morphs in ANNIS like this: 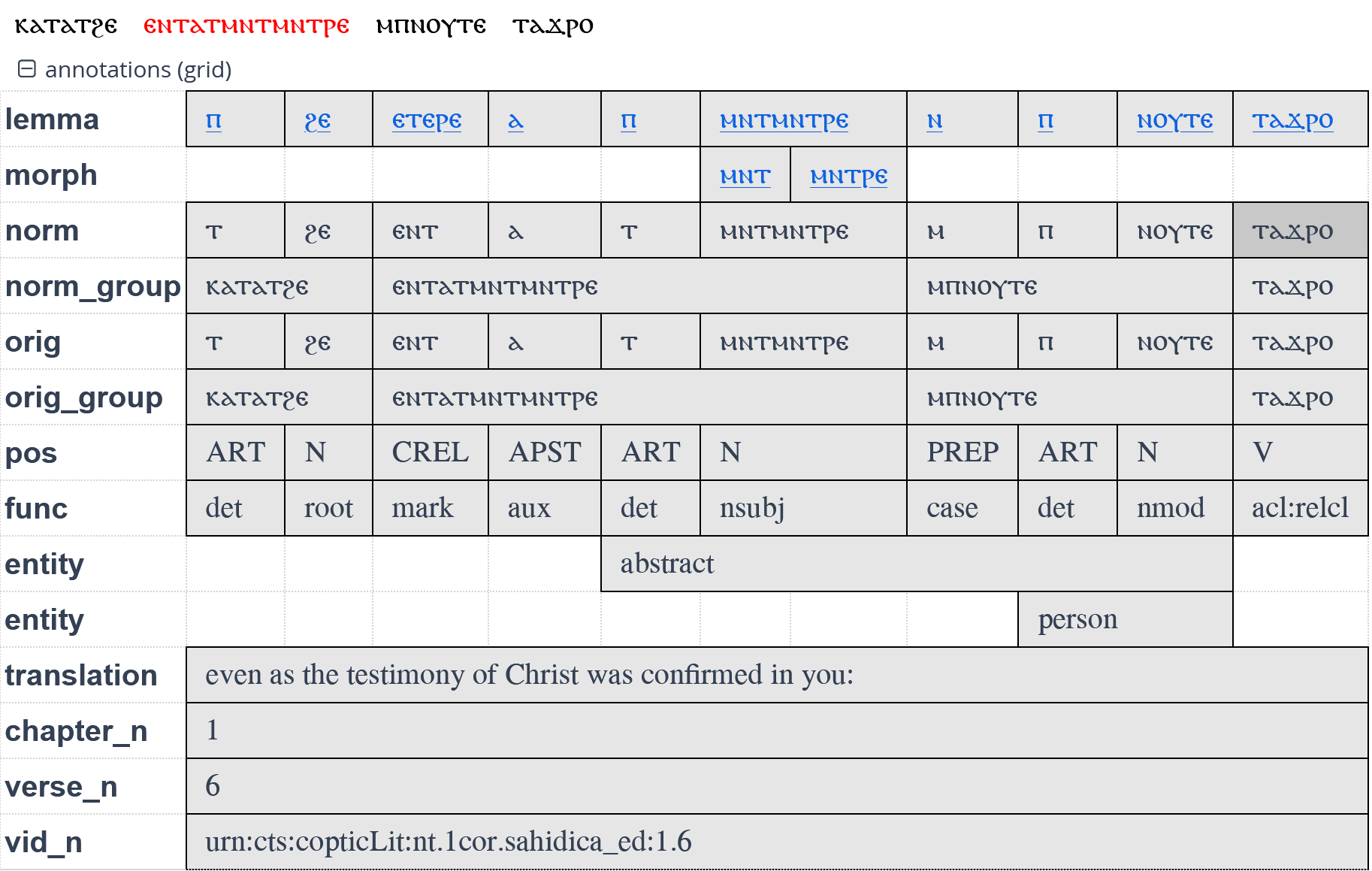 Sometimes we want to search not for norm units, but for original spellings found in manuscripts. You can use the following queries to find specific spellings, including supralinear strokes and other diacritics:

Note that diacritics will always be removed in the norm annotations, but will be retained in orig if available in the original transcription. After you have run a search, you can also toggle the visualization between original and normalized spelling by choosing the Base text drop down at the top of your search results and switching between norm_group (the default) and orig_group. It is also possible to switch to norm or orig, to see the text segmented into units, rather than bound groups.

If you want to find all forms of an inflected word, you can search for lemmas instead of norm forms. For example:

This search finds the absolute form ⲕⲱⲧ, but also the reduced form "ⲕⲟⲧ" and even the stative form "ⲕⲏⲧ", which all have the same lemma or dictionary entry. In the annotation grid, lemmas are clickable and link to a search in the Coptic Dictionary Online.

Sometimes it can be useful to search for units or bound group containing some letter or letters. We can do this using wildcard, or 'regular expression' searches. You can run such a search on any annotation layer by using slashes instead of double quotes, and the following operators:

For example, you can run these searches:

Coptic Scriptorium data is annotated with grammatical parts of speech for every norm/orig unit.

The part of speech tagset

The possible parts of speech are divided into coarse categories, which can be searched for using regular expressions:

Searching for words with tags

We can combine the search for words and tags using the operator _=_, which mean 'in the same place' or 'covering the same span of text'. For example, the following searches for verbs starting with ⲣ:

For words of foreign origin, Scriptorium tags the earliest language of origin using lang, as follows:

Note that Hebrew origin names, such as ⲁⲃⲓⲙⲉⲗⲉⲭ are tagged as Hebrew, not Greek. It is also possible to combine language of origin with part of speech, for example to find verbs of Greek origin:

Note also that if a verb is complex, such as ⲣ-ⲭⲣⲉⲓⲁ, the search above will not find it, since not the entire word is Greek. In such cases, only a search on the morph level will recover the Greek language of origin. See more about searching within spans under 'Searching for longer span annotations'.

To search for multiple words or bound groups we must specify the order in which they appear, and possibly the distance. Sequences of words and annotations work similarly, and can be mixed freely.

We can also specify a range of possible distances between words, for example the auxiliary ⲁ followed by ⲇⲉ within 1-10 tokens:

If order does not matter, we can use the operator ^ instead, which can be used with or without token ranges, just like .:

Combining annotation and word search is possible too:

This finds the norm unit ⲛ, but only if it is also tagged as PREP.

Sometimes it makes sense to ask for all values except for something, usually in combination with some positive search. You can negate values with != instead of =:

This finds all cases of the norm unit ⲛ which are not prepositions.

If you look at an annotation grid for any search result, you will notice longer span annotations, such as translation, entity or multiword, which give translations, entity types (person, place etc.) and multiword expressions respectively. Searching for these by themselves works as usual with both exact and wildcard searches, as well as multiple adjacent spans with .:

However sometimes we want to express complex overlap relations between spans, such as a translation or entity span containing a certain word. For example, we can find instances of ⲉⲓⲱⲧ meaning 'barley' rather than 'father' in two different ways, using the operator _i_, which means that one span includes another (i.e. the second span is nested and smaller or equal to the first one:

You can see what metadata a corpus or document has by clicking on the i-button for that corpus, or for the search result that comes from a particular document: 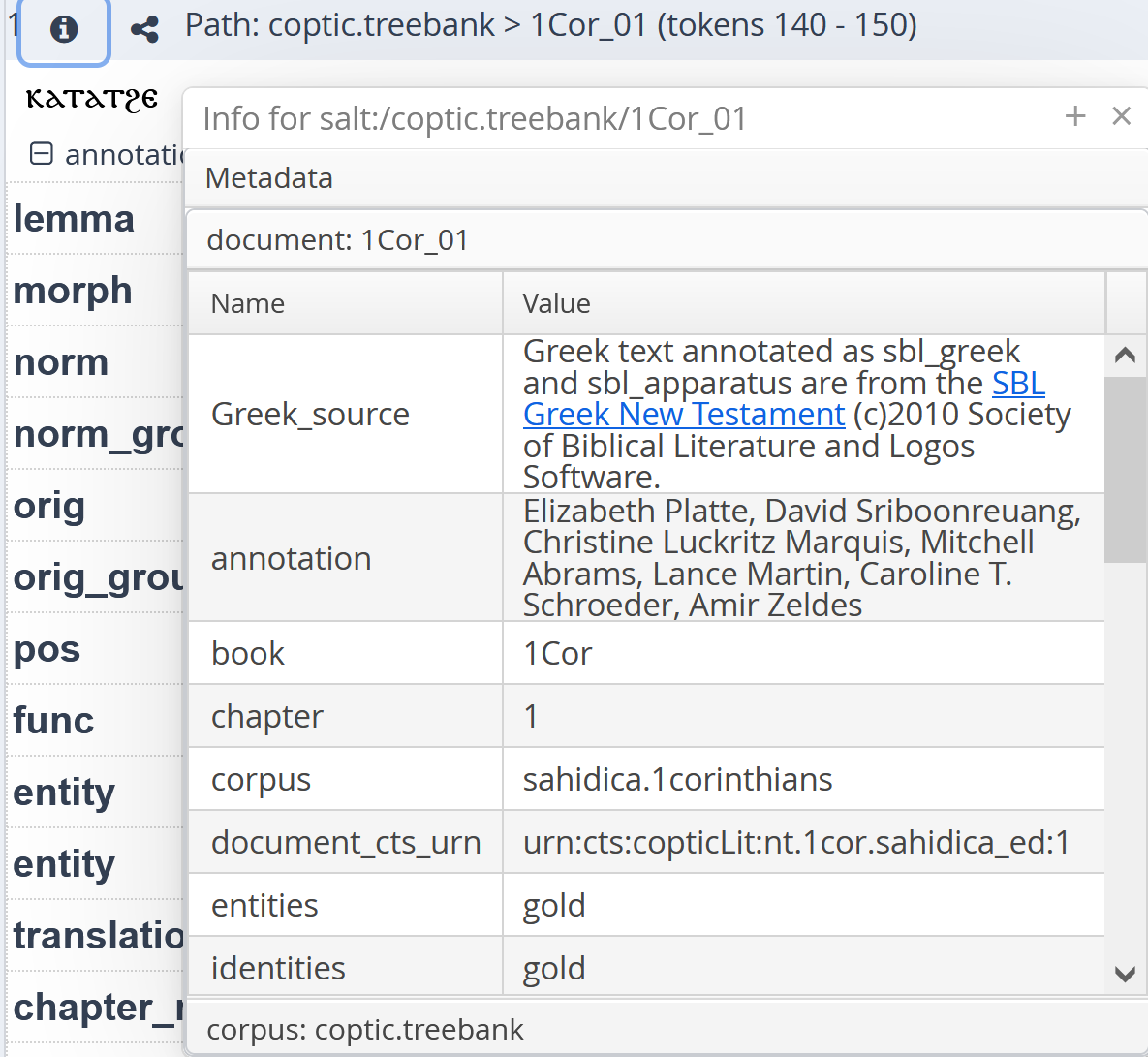 To search using metadata criteria, just use the annotation name and value after the prefix meta:: and add them to your query with & like this (regular expression wildcards work as usual):

Norm units in each sentence are connected by dependencies which express their grammatical functions. To search for these functions, you can use the func annotation, for example to search for nominal or clausal subjects (nsubj and csubj), or objects (obj):

You can see how these functions connect to other words by expanding the syntax visualization (the complete list of grammatical functions can be found in the Coptic Universal Dependencies Documentation). 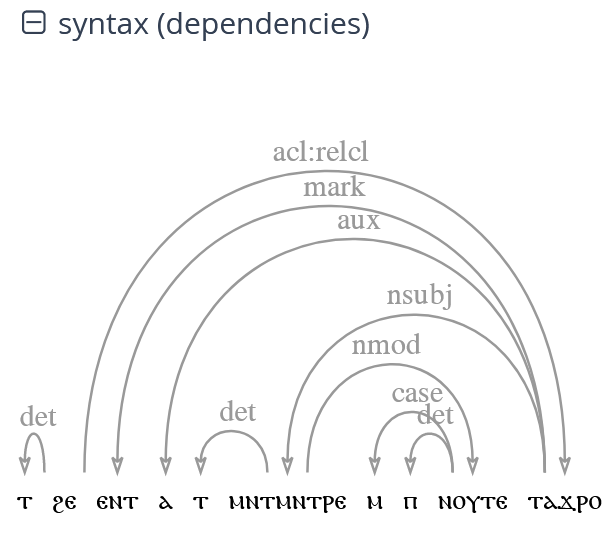 Using the dependency relation operator ->dep we can also constrain functions to attach to certain words or parts of speech, for example to search for objects of the verb ϯ 'give', or for cases of fronted dislocated arguments (e.g. "Me, I haven't seen him"):

In the second example, we want to specify both the dislocated dependency between the two search terms (with ->dep) and the ordering (dislocated argument precedes verb). Since we cannot use two operators simultaneously, we add a condition using &, then specify that the second term we declated (func="dislocated", now referred to as #2) should precede (.*) the first thing we declared (the verb, now #1).

Once a query has been formulated, we can select More -> Frequencies to get a frequency breakdown of the values for the annotations we searched for. In such cases, it often makes sense to leave some annotation values unspecified. For example, we can look for a breakdown of all Greek origin words by specifying the language and asking for a lemma with no constraints:

This will match any lemma with Greek language, and the frequency breakdown will provide counts for each type. 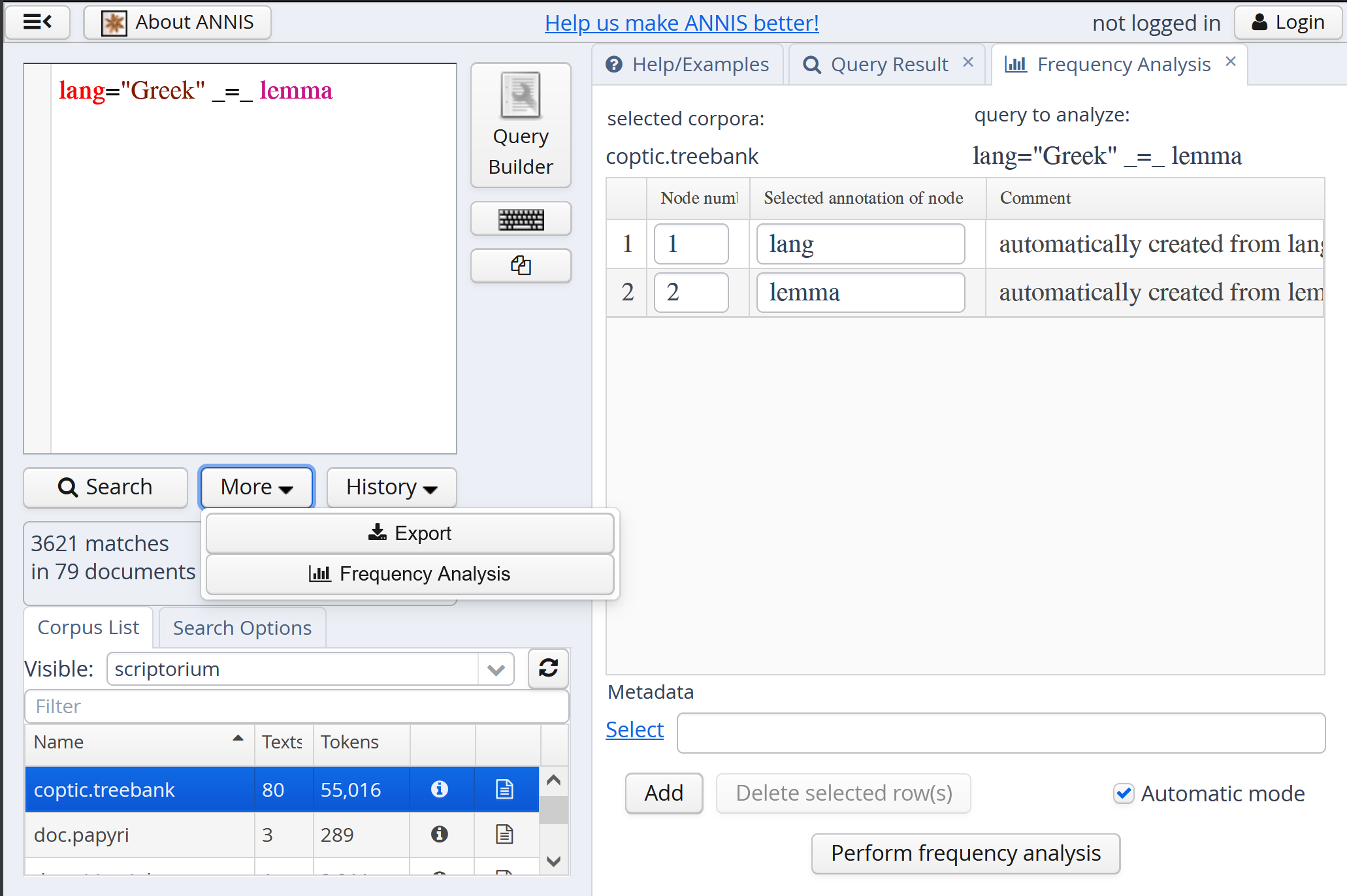 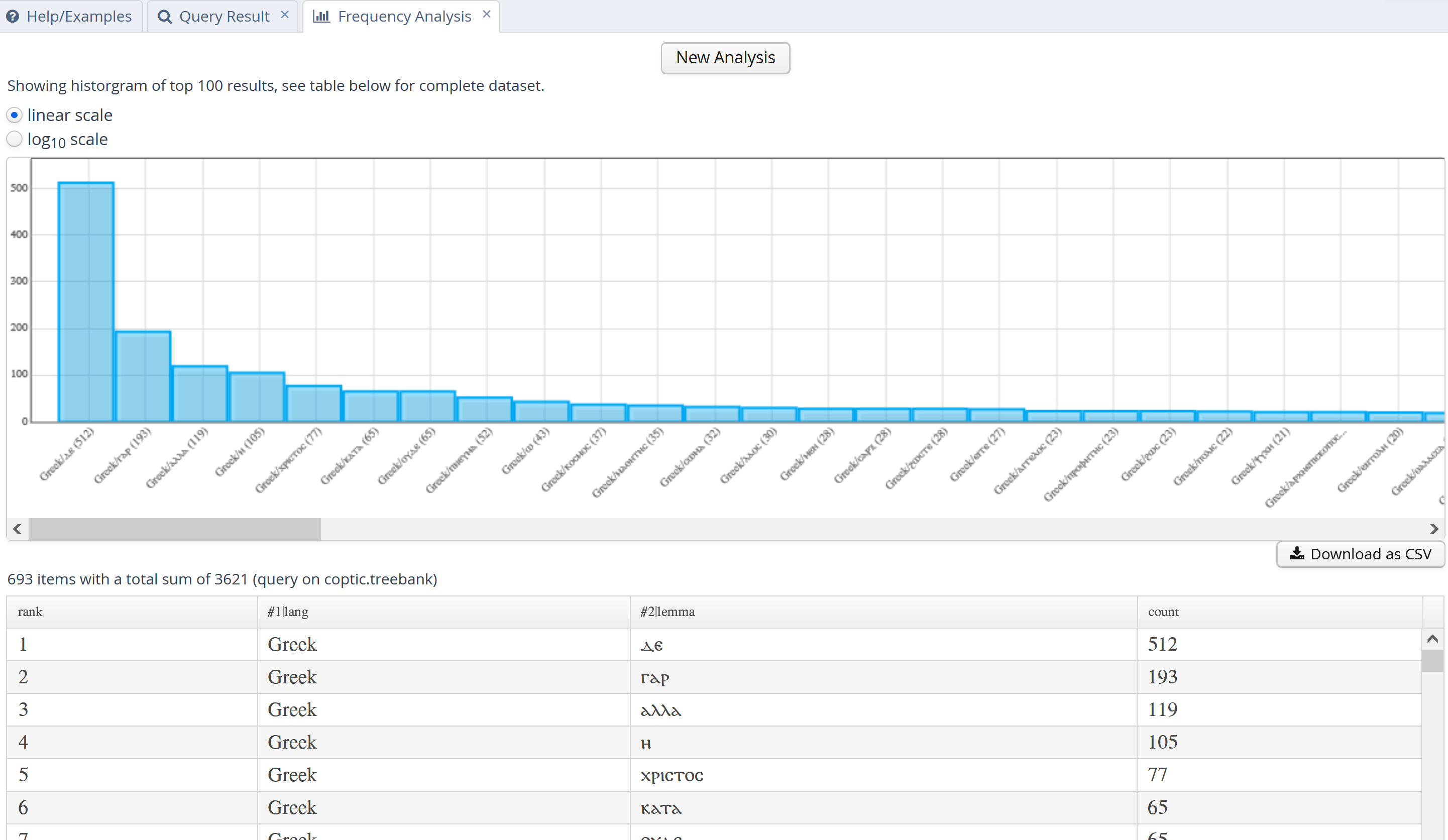 Alternatively, we can download all results matching this query using the CSV exporter by selecting More -> Export, then clicking Perform Export and finally using Download when the export is ready. For more information on different export formats, see the ANNIS documentation.

Please see the citation guidelines here for how to cite search results in academic papers.